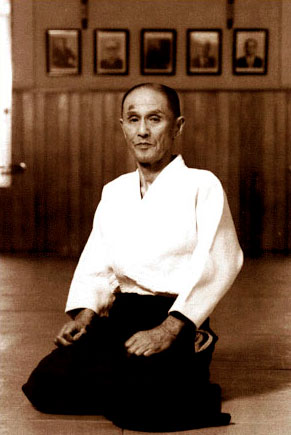 Throughout the history of Yoshinkan Aikido, many prestigious people have visited Honbu Dojo. These have included Mike Tyson, the past US Senator Robert Kennedy with his Wife in 1962, Prince and Princess Hitachinomiya in 1965, and Princess Alexandra in 1965. The current Emperor also visited in 1987 spending a long time meeting with Shioda Gozo Kancho privately and observing a special demonstration. There have also been many other famous visitors from around world who have enjoyed viewing Yoshinkan demonstrations.

Gozo Shioda Sensei was born in 1915. His farther, Dr. Seiichi Shioda was known as a famous doctor and a patriot. Gozo was his second son.
When Gozo Shioda sensei was 18, he became a student of Morihei Ueshiba Sensei (O-Sensei), the Founder of Aikido. He spent 8 years with Ueshiba Sensei, dedicating his life to follow his Sensei and mastering Aikido.
After World War II in 1954, the Life Extension Society held an All Japan Martial Arts exhibition, where Gozo Shioda's demonstration was highly praised and he received the highest award. This was a very important event because Aikido was noticed by Japanese society. 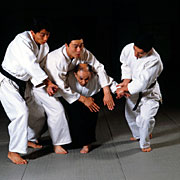 People rapidly became interested in Aikido.
After 1 year from the Exhibition, Japanese business leaders supported Gozo Sensei to establish Aikido Yoshin-kai, and The Yoshinkan Dojo.
Gozo Shioda Sensei worked hard throughout his life spreading and developing Aikido for 40 years since the founding of Yoshinkan. On June 17th, 1994, after medical treatment, he peacefully passed away.

Shioda Gozo's Yoshinkan  Aikido has been passed on to many instructors, who are now trying hard to spread Yoshinkan Aikido all over the world, with many.